Which President Slept With the Most Women?

On the surface, this question seems to be a competition between two men: John F. Kennedy and Bill Clinton. The press has inundated us with tales of these presidents’ sexual escapades, helping to form disturbing, inescapable mental imagery whenever we hear the “Happy Birthday” song or the words “blue dress.” 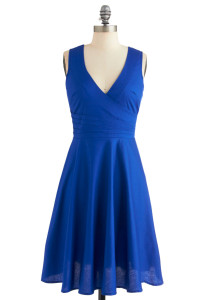 JFK deserves his reputation for sexual promiscuity. To save you time if you want to skip to the next question, he’s probably the president with the most notches on his bedpost. Before entering the presidency, Kennedy used his dashing good looks and family fortune to sleep with many beautiful young women. The escapades continued after Kennedy married and entered the White House. As president, JFK famously bedded Marylyn Monroe, mob-gal Judith Exner, and LSD-enthusiast Mary Pinchot Meyer, among many others. JFK had so many sexual conquests that some historians argue that he was a sex addict, a narcissist, and suffered from satyriasis, or lack of self restraint. 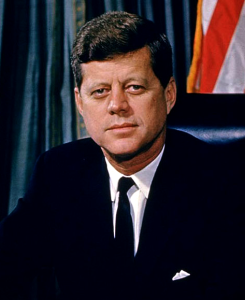 I was also addicted to pain medication. Look it up.

Bill Clinton’s political opponents would make similar claims about the 42nd president of the United States. Growing up in 1950s Arkansas, Clinton lacked Kennedy’s wealth and dashing good looks, but he made up for these deficiencies with his charm and lower standards in women. He also had the fortune to live in a more sexually liberal era than Kennedy did, which likely elevated his sexual conquest count. Like JFK, marriage and politics did little to quell Clinton’s sexual appetite. Although most historians have discredited accusations that Clinton used his position as governor of Arkansas to have state troopers set up sexual liaisons, most recognize that Clinton slept around before attaining the presidency. While Clinton himself admits to only one affair during his time as governor, many women have accused “Slick Willy” of sexual impropriety. Clinton’s only known extramarital sexual encounter in the White House was with Monica Lewinski, although the president would argue that their brand of intimacy did not amount to “sex.”

Who was more sexually prolific, then, Clinton or JFK? It would have to be JFK. He held office at a time when the press tended to ignore the private lives of public officials and as such, Kennedy could bring women into the White House and rely on the press’s discretion. As evidenced by the Monica Lewinski scandal, Clinton found it more difficult to carry on an affair in the internet age.

So JFK, then? Can we move on to the next question now? I’m bored. Not so fast, internet reader. While Kennedy and Clinton may be the most well known presidential philanderers, they are not without competition. Three other twentieth-century politicians also had numerous sexual conquests, but never received the notoriety of JFK and Slick Willy. 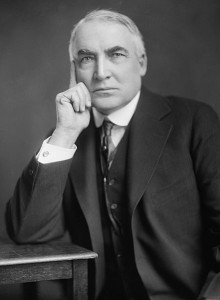 Warren G. Harding. This was what handsome looked like in 1920. 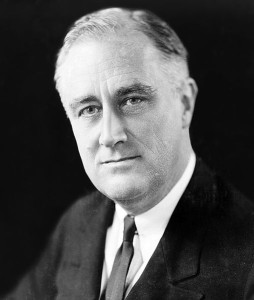 FDR. His legs may not have worked, but….

Franklin Roosevelt (president 1933-1945) also had a number of sexual encounters early in life and plenty of extramarital affairs later in life. Unlike the other presidents listed here, historians suspect that Roosevelt’s wife Eleanor consented to the unions. Eleanor did not like to have sex with FDR—there is some evidence that she may have been a lesbian—but she knew that her husband had a bright future, and, sharing his political beliefs, believed that as president he would do good for the country. In order to avoid a divorce, which would look bad to voters, Eleanor turned the other way when Roosevelt slept around. And he did. A lot. Rumors tie FDR to Eleanor’s 23-year-old secretary, Lucy Mercer, and his own personal secretary, Marguerite LeHand. Roosevelt may even have had an affair with the Princess of Sweden.

Perhaps the biggest challenge to JFK’s crown comes from the man who succeeded him in office: Lyndon Johnson. Johnson was a good ol’ boy, who happened to have, well, a big *ahem*, Johnson. And he wanted people to know it, so he took every opportunity to take it out in public, once urinating on a reporter’s shoes. 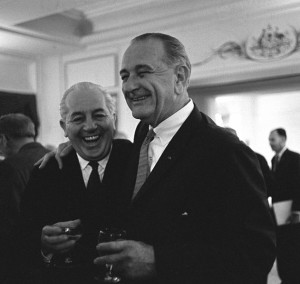 I’ve got something I want to show you.

This wasn’t the only thing Johnson used his Johnson for. Unlike Kennedy, who was driven by sexual addiction, Johnson slept with women out of a competitive nature. When someone brought up Kennedy’s sexual conquests, Johnson reportedly banged his desk and claimed that he’d, “had more women by accident than [Kennedy] ever had on purpose.” Johnson had so many women come into the White House that he had a bell installed in the Oval Office so the Secret Service could warn him if his wife was on her way.

Although Johnson, FDR, and Harding were no slouch with the ladies, we still know about more of JFK’s dalliances. There are the dozen or so women that claim to have had an affair with Kennedy, the numerous famous women that were rumored to have been with Kennedy, and the multiple mistresses discovered by F.B.I. director J. Edgar Hoover’s surveillance of Kennedy. And these are the ones we know about. There are probably a lot more out there.

Having said all that, a few presidents not listed above may have slept with more women than Kennedy. The distinction may belong to one of our eleven presidents who owned slaves. Slave owners in the nineteenth viewed their bondspersons like property and as such, many owners felt that they could whatever they pleased to said property, including using enslaved women to satiate their sexual desires. Although early American society looked down on mixed-race coupling, this form of rape—yes it was rape because slave women had no say in the matter—was very common in the pre-Civil War South.

Presidents Washington, Jefferson, Madison, Monroe, Jackson, and Polk and their immediate families all had over a hundred slaves throughout their lives. These presidents went through puberty around slave girls, and as older men, they had young, attractive slave women attend to their needs. It would not be unreasonable to think that many of these men took sexual advantage of their situation.

Do we have any evidence to support this assumption? Some, but not much. There were rumors that Washington slept with his slaves, but as the man was likely impotent, no child came of such unions. Without DNA evidence, we can’t accuse George. 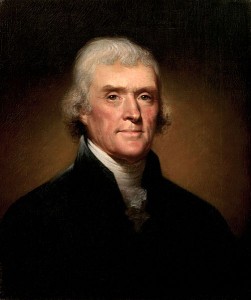 There is DNA evidence that points to Thomas Jefferson having fathered children with his slave Sally Hemings, herself the product of Jefferson’s father-in-law sleeping with a slave. Although the children with Hemings would seem to indicate that Jefferson took advantage of the over 100 slave women he owned in his life, historians believe that Sally was Jefferson’s only slave mistress. These historians argue that after Jefferson’s wife died, he transferred his affections to her slave half-sister, Sally. In addition to having slept with Sally and his wife, Jefferson bedded a number of women while in Paris serving as U.S. minister to France. This places Jefferson’s amount of sexual partners alongside that of many of the above twentieth century presidents.

Although Jefferson may have only slept with one slave women, it’s quite possible that one of our presidents have been with more women than JFK owing to non-consensual sexual relations with slave women. We just don’t know about it and probably never will. So we have to stick our heads in the sand, not take slave-rape into consideration, and anoint Kennedy as our most sexually prolific president.