This week, Brad Folsom and I (Cameron Sinclair) review the 2012 drama, Emperor, directed by Peter Webber, and starring Matthew Fox and Tommy Lee Jones as Douglas MacArthur.  This movie portrays the events surrounding Douglas MacArthur’s decision to allow Emperor Hirohito to remain on the throne following Japan’s defeat in World War II. The movie follows the investigation of General Bonner Fellers (Matthew Fox) into how involved the Emperor was in the Japanese war effort. All the while, the viewer is exposed to the devastation of Japanese cities following the American-led firebombing campaigns and the atomic bomb drops. How well does the shocking imagery fit the historical reality? How well does Tommy Lee Jones do MacArthur? And, was Bonner Fellers a real name? Find out here! 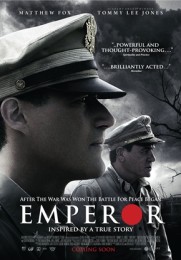 On the next podcast – HBO’s Boardwalk Empire (2010-present)

Intro music from this episode:
“Young” from Low Wishes by Air Review
airreview.net

In Case You Missed It

- A Digital Model of Ancient Rome
- Did this Weapon Almost Win WW1?
- The Civil War's Effect on Canada
- A History of the Pink Flamingo
- Soldiers Returned from WW1 with Ghost Stories
- Famous Photos that Ruined Lives
- The Worst Day in LGBT History
- More on the Newly Discovered Mayan City
- The 1374 Plague that Made People Dance
- Excavation of Chinese Emperor's Tomb
- The Disastrous 1898 North Pole Balloon Trip
- High Tech Images of a Japanese Burial Mound