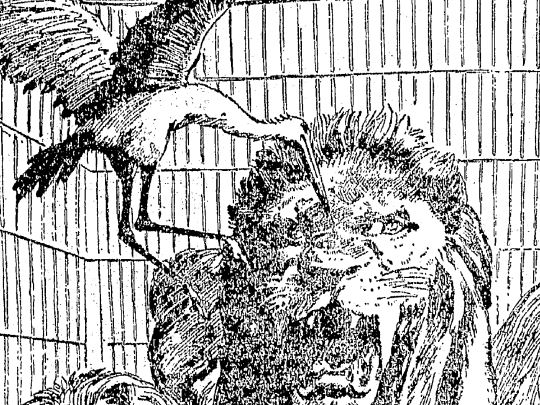 In past articles, we’ve chronicled some insane animal on animal fights from history. We’ve seen a bear body slam a lion, a rhino gore an elephant, and a buffalo throw a bull through a wood fence. Although some of these matchups were one-sided routes, they all had the promise of being competitive before combat began, which makes sense. Because it took time and money to find the various animals, the people staging fights would want to maximize entertainment value by pitting roughly equal competitors against one another. It’s the way combat sports are done today. Heavyweights fight heavyweights. Lightweights fight lightweights. This way, bouts last longer and outcomes aren’t predictable.

Although the vast majority of interspecies fights I’ve run across adhere to this system, I’ve also seen matchups that defy logic. Lop-sided fights where it looks like one poor combatant has no chance to win. Showdowns between animals that would have no reason to fight and, on first glance, wouldn’t even know how to hurt their opponents if they did. Face offs between creatures on completely opposite ends of the evolutionary spectrum. Weird stuff.

Here’s the thing, some of these fights actually ended in surprising results. And while others had predictable outcomes, the fact that they even took place makes them interesting to read about. Here are the strangest interspecies animal fights from history.

In 1899, a German animal trainer decided to stage a cage match between a stork and a lion, because, apparently that’s what Germans did for fun in 1899. The stork, Fritz, was four feet tall with a seven-inch bill. Zampa, the lion, was a two-year-old male that, while undersized, probably outweighed his fowl opponent by a few hundred pounds. Both animals belonged to the trainer, who, after inviting some friends to his zoo to watch the bout, wheeled the stork’s cage against the cage holding the lion.

When the trainer opened the gate separating the two animals, Zampa moved slowly towards the weird looking bird and roared when he came within a few feet. The growling caused Fritz to bristle, lift his wings, and snap his beak together, creating an annoying clapping sound. The unusual spectacle frightened Zampa and for a brief minute, the lion backed off. When Fritz calmed down, the lion once again moved in, and again, the bird responded by flapping its wings, this time almost bopping the oncoming feline on the nose. When Zampa again cowered, Fritz took the offensive. He flew at the lion and pecked the cat’s nose, causing it to gush blood. This was enough for Zampa. He fled to the opposite end of the cage and refused to go anywhere near the stork.

To prove that the victory was no fluke, the trainer released Zampa’s three-year-old brother into the cage with the stork. This time, Fritz did his best to avoid his new opponent, hopping away whenever the lion came near. When, at one point, Fritz, briefly turned away, the lion rushed at the bird intent on ripping it to pieces. At the last second, the stork spun and embedded his beak deep in the lion’s face. Just like his brother, the lion fled to the other end of the cage and refused to fight any longer. 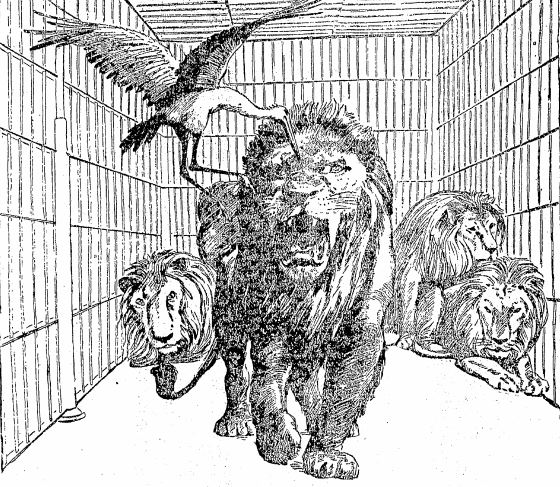 Fritz faced three more lions and retired all three with pecks to the face. The next day, the trainer put two lions in the cage with the stork at the same time. It didn’t make a difference. Fritz kept his back to the wall and used his beak whenever the two felines dared to step on his side of the cage. By the end of the week, Fritz shared a cage with five lions who were afraid to go anywhere near the bird.

On December 16, 1889 in Van Wert, Ohio, animal trainer W.H. Stewart offered to fight his adolescent gorilla against any dog in the county. The owner of a 50-lb English bulldog took Stewart up on his offer. Although the bulldog would have little hope against a fully-grown gorilla—which weigh over 300 lbs—it was giving up only 30 lbs to Stewart’s juvenile ape.

The primate was the first into the eight-foot high, twelve-by-twelve enclosure where the fight was to take place. The second the bulldog joined him, he leaped and sank his teeth into the gorilla’s neck. Owing to thick skin and because the ape had managed to extend his arms and catch the canine before it could fully clench, the bulldog failed to pierce a jugular. This would prove to be a fatal mistake. In less than a minute, the gorilla used its strong arms to pry the bulldog from his neck. The simian then slammed his opponent and sank his teeth into bulldog’s spine. The gorilla continued to bite until “blood flew in streams” and “spattered spectators.” Before long, “the pen resembled a slaughterhouse” and the dog was dead.

As if one gorilla-bulldog matchup weren’t enough, the two species faced off again in 1911 in New Iberia, Louisiana. The results were almost identical to the fight twenty years before. The match began with the dog lunging for the ape’s jugular. This time, however, “the gorilla caught the dog just as a man catches a baseball.” The ape then pinned the canine and bit chunks out of his skull and spinal column. The fight was over in less than three minutes. 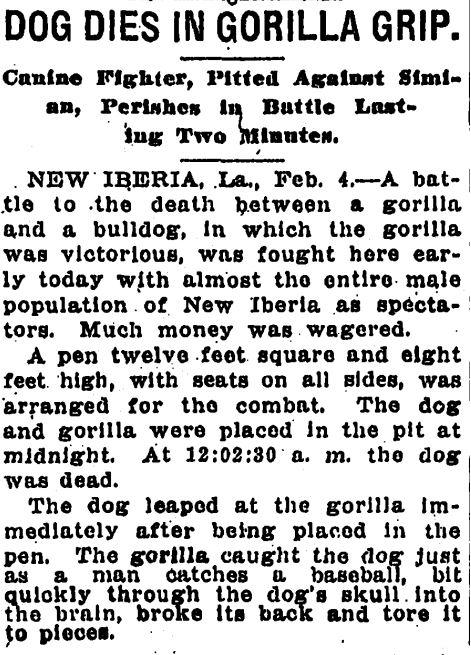 On February 6, 1904, the Watertown Daily Times reported that a boxing kangaroo and an American bison had just fought in a tiny Colorado town. Zookeepers had recently purchased the kangaroo from a defunct circus, but because their zoo was small, they didn’t have a cage for the animal. Therefore, it was decided to put the kangaroo in the same pen with an American bison. Both animals, after all, were herbivores. What could go wrong?

The zookeepers inadvertently started an interspecies cage fight. Disagreeing with the prospect of having to share his cage, the buffalo reared up and charged his new cellmate. The kangaroo—at most 200 lbs—saw the one-ton animal heading in his direction and sashayed out of the way. It dodged a second charge in this same manner. And a third. When it became clear that the bison didn’t plan to stop his assault any time soon, the kangaroo employed its boxing training. Whenever the buffalo approached, the marsupial jumped and kicked his attacker in the face. The kangaroo continued this for an hour until the buffalo began bellowing and retired to one the side of the enclosure where he laid down and went to sleep.

In 1892, a dozen men stood around a circular enclosure in the center of a San Francisco athletic club to watch a rattlesnake named Mars fight Casey, a hog. Apparently, Casey “had killed numerous reptiles before,” which led the spectators to conclude that the pig was impervious to snake venom. As such, Casey was the overwhelming favorite in his matchup with the snake.

When the two animals were loosed in the circular enclosure, Mars took the initiative, slithered over to his swine opponent, and buried his fangs deep into the pig’s shoulder. Casey squealed, shook, and stomped until the reptile released its grip. Once free, the pig went after the snake, but the serpent was elusive and led the hog around the ring. Making things more difficult, the snake’s venom made its way from Casey’s shoulder to his leg, swelling the appendage and causing the pig to hobble. In spite of the injury, the pig eventually tracked down the snake and bit it in half. Because the snake continued to writhe involuntarily, Casey continued to eat, eventually consuming the entirety of his opponent.

Although, the snake had been reduced to a meal, it’s venom continued to flow through Casey’s veins, causing the pig to collapse in agony. Hoping to head off the poison before it could reach his pet’s heart, Casey’s owner poured whiskey down the pig’s throat. The booze antidote proved ineffective, Casey fell asleep, and never woke up. Although both animals died, the spectators declared Casey the posthumous victor. 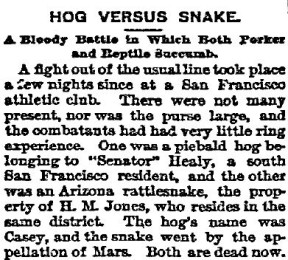 Perhaps the most unusual animal-on-animal combat happened over 2,000 years before the rest of these entries. It occurred when famed Macedonian conqueror Alexander the Great put on a fight between a dog and an elephant. While on his way to conquer India in 336 B.C.E., the King of Albania gave Alexander a large dog, which he claimed to be one of the most dangerous beasts known to man. Although the exact breed of this canine is unknown, it may have been an ancestor of the Sarplaninac, a shaggy sheepdog that can weigh over 100 pounds.

A sadist, Alexander showed his gratitude by immediately fighting his gift against other animals. Unfortunately for the Macedonian and his men, the dog seemed disinterested in fighting. When Alexander put the animal into a pen with a deer, the dog did nothing. A boar. Nothing. A small bear. Nada. The dog laid there. Fed up, Alexander had the animal killed. When news of this reached the King of Albania, he sent Alexander a second dog and told him that the animal would only respond to larger opponents.

The King was right. When Alexander ordered the dog to be matched against a lion, the canine “tore the lion to pieces.” Alexander didn’t stop there. He put the dog in an enclosure with an Indian elephant, the world’s largest land animal. The sight of the five-ton beast sent shivers through the canine’s spine. Its hair stood on end and started barking so loud that it “sounded like thunder.” Although scared, the dog tried to attack his 10,000-pound opponent. He ran up and snipped at one side of the elephant, retreated, and then bit at the animal’s other side. Whenever the elephant swung around to bring his tusks to bear on the dog, he found that his opponent had already moved to his other side. So the elephant kept circling. And circling. Before long, the great beast grew dizzy, its eyes rolled in the back of its head, and it collapsed. The ground shook. 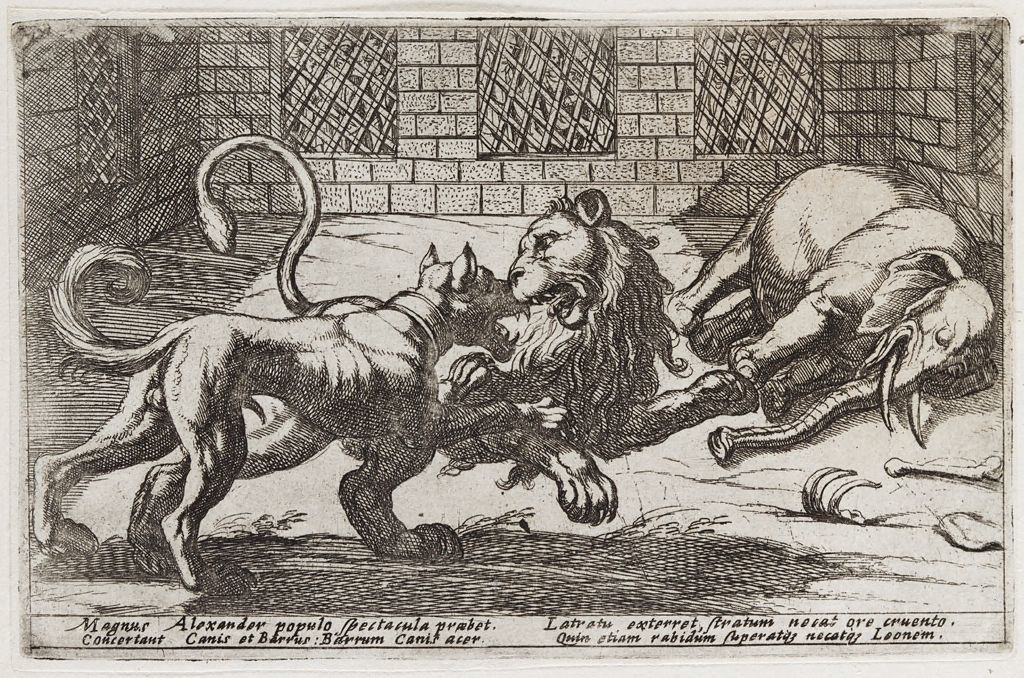 16th century depiction of Alexander’s dog fighting a lion and an elephant.

Yes. A dog defeated an animal almost 100 times its weight. Although weird, these interspecies fights were exciting.

“Bulldog and Gorilla Battle to the Death,” Philadelphia Inquirer, February 5, 1911.