The First Buffalo to Cross the Atlantic Ocean

On March 5, 1779, Texas Governor Domingo Cabello y Robles received the weirdest orders he’d seen in his many years of service: the King of Spain wanted the governor to deliver him a buffalo. Cabello would have to send someone to the plains of Texas, capture the notoriously ornery animal alive, somehow deliver it almost 1000 miles over rough terrain to the port of Veracruz and hope the buffalo survived a sea voyage to Spain. The king was asking Cabello to deliver North America’s largest land animal across the Atlantic for the first time in history (Europe had bison, but they were much smaller, less hairy, less aggressive, and, frankly, less badass than their American counterparts). 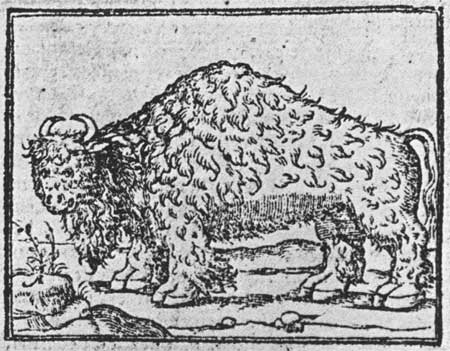 Buffalo had fascinated Europeans ever since Spanish conquistador Francisco Coronado returned from North America in 1540 with stories of an animal that roamed the plains in herds numbering in the tens of thousands. A generation later, Spanish settlers in New Mexico sent buffalo drawings and furs back to Spain, as well as descriptions of Plains Indians who made their homes from buffalo skin and lived almost exclusively off bison meat. Although the animal and the people who lived off it provoked curiosity in Europe, because of the difficulty in herding bison and the Spanish preference for cattle beef, Spain saw no need to bring buffalo to the Old World. Stories and trinkets sufficed.

That was until Charles III took the Spanish throne in 1759. At the time, Texas was a part of the Spanish empire, which stretched from the southern tip of South America to the Pacific Northwest. Owing, in part, to this enormous size, the Spanish had yet to conduct detailed scientific studies of the land. To rectify this, when Spanish King Charles III ascended to the throne of Spain, he made it one of his duties to learn as much as he could about his American Empire. Charles wanted to find plants to exploit for medical and commercial purposes and animals to dissect and experiment on to increase Spain’s prestige in Europe’s scientific community.

He also wanted monsters. In the eighteenth century, European elites liked to impress their buddies with the strangest, most terrifying animals they could find. As such, Spanish kings had colonial leaders send hundreds of live and stuffed animal for display in their zoos and curiosity cabinets. Shipments included many animals unknown in the Old World, such as alligators, monkeys, anteaters, leopard cubs, and iguanas. There were even stranger curiosities. One shipment to Spain included a hermaphroditic horse. Another contained a jawbone of a “strange monstrous animal” from Nicaragua that lived in a swamp and ate cattle. Spanish kings also received an unusual creature born from a pig and the “bones of a giant” (as well as a “light machine” from Peru. Have fun with this stuff, cryptozoologists and conspiracy theorists). Although a buffalo wouldn’t be as impressive as a swamp monster, the animal would certainly bring Charles III prestige.

Charles III may also have wanted a bison to tests a theory that American animals were smaller than their European counterparts due to the Western Hemisphere’s insalubrious environment. He could prove or disprove this notion with a buffalo. Charles may also simply have been curious about the animal that kept the Indians of the North American Plains alive. Because bison meat and furs allowed Plains Indians to live a mobile lifestyle, they were one of the few New World peoples who had been able to successful resist subjugation at the hands of the Spanish.

Whatever the reason, the King ordered Texas Governor Domingo Cabello y Robles to send him as many living bison as he could procure. Cabello would have to include detailed instructions on how to feed and care for the animals so they wouldn’t die upon reaching Europe.

Having only been in Texas a year, Cabello knew little about bison and even less about catching one of the animals. The governor, however, realized that if anyone were up to the task, it would be Carlos Rioja, Texas’s most experienced hunter and rancher. Although Rioja had seen plenty of buffalo, he’d never herded the creatures and was only able to catch one of the animals on his first foray into the plains in 1779. He managed to round up twenty buffalo on a second expedition, but when he then tried to drive them to San Antonio as he would cattle, many of the bison died of heat exhaustion. Others seem to have reacted so violently to captivity that they killed themselves. By the time Rioja reached the presidio that would house the buffalos, only the two six-month-olds remained. The soldiers of the presidio kept the two animals alive by encouraging them to nurse off a cow. Somehow, Cabello managed to have four more buffalo delivered to the presidio between 1779 and 1780. One of the seven animals died, leaving six for the king.

At some point in 1780, Cabello assigned military officer Antonio Curbelo and ranch hands Francisco Pacheco and Lorenzo Reñie the duty of delivering the buffalo from Texas to Spain. Although details of their journey are lacking, the trip took some four years and seems to have been very difficult. The men probably marched the 700 miles from Texas to the port of Veracruz, where they caught a boat leaving for Spain. Four of the six buffalo perished before reaching their destination, leaving Curbelo just a single male and female to show to the King upon arriving in Madrid in 1784.

If the King was upset by this, he didn’t show it. Instead, he expressed “great satisfaction” upon seeing the two animals, lavished promotions and bonuses on Curbelo and his two assistants and paid for their trip back to the Americas. The king also singled out Governor Cabello for praise and would later promote the governor to field marshall.

The fate of the two buffalo is unknown. Although Spain has a similar climate to Texas, the change in diet, conditions of captivity, and unfamiliarity of Spanish keepers with bison may have doomed the animals to a short life. Even if they survived and lived long lives, it’s unlikely that they reproduced, as it’s very difficult to breed buffalo in captivity.

Because of this, there were no lasting consequences to the first transfer of buffalo from the New World to the Old. The story, however, shows the one-way nature of European colonization. When the Spanish, English, and French settled around the world, they did their best to make their new surroundings as close to home as possible and rarely adopted the customs of native peoples. They ripped up fields of native foods—such as easy to grow, calorie-rich, and otherwise awesome potatoes—and planted European wheat. The same thing happened with bison. Although buffalo meat is in many ways superior to beef, Europeans made few efforts to domesticate the animal or bring it to Europe. Instead, they shipped tens of thousands of cattle, their preferred form of meat, from the Old World to the New. As such, hundreds of thousands of cows roamed the plains of Spanish Texas by the time Charles III’s intellectual curiosity and desire for “monsters” brought the first buffalo to the Old World.

Correspondence between the Governor of Texas and the Spanish governor can be found here: http://www.cah.utexas.edu/projects/bexar/search.php?t=54&s=0&searchText=buffalo+king&beginyear=&endyear=&searchtype=documents&Submit=Submit

Paula De Vos, “The Rare, the Singular, and the Extraordinary: Natural History and the Collection of Curiosities in the Spanish Empire,” Science in the Spanish and Portuguese Empires, 1500-1800 (Stanford: Stanford University Press, 2009).

Recently, NPR published an article about Thomas Jefferson’s efforts to have a moose from the United States shipped to France, where the future president was serving as an ambassador. Jefferson hoped to disprove a French scientist who claimed that American people and animals were smaller than their European counterparts because America had an unhealthy environment.  Jefferson hoped that a half-ton moose would show the scientist the error of his ways. Jefferson eventually received his moose in the 1780s, but the animal was dead and its corpse in a state of decay. This did little to prove the healthful nature of the Americas. If Jefferson had, instead of seeking a moose, looked just south of France to Spain, he may have found two of the New World’s largest mammals.