The Second Battle of San Jacinto

Note: I’ll be writing more Texas-related posts than normal over the coming two months in the hopes of raising money for the Texas State Historical Association. Additionally, on the weekend of March 28-30, I’ll be part of the TSHA’s 12-man relay team in the 200-mile Texas Independence Relay, which hopes to raise $35,000 for various Texas history projects. If you want to donate to the TSHA, please click on this link.

Most Texans are familiar with the Battle of San Jacinto. On April 21, 1836, Texas revolutionaries under Sam Houston launched a surprise attack on the Mexican forces of Antonio Lopez de Santa Anna. In a matter of 18 minutes, the Texans decimated the Mexican army, killing 600 and capturing 700, including Santa Anna. The Texans lost just nine men. Following the lopsided battle, Sam Houston forced Santa Anna to sign a treaty recognizing Texas independence from Mexico. Next to the Alamo, the Battle of San Jacinto is probably the most well known military conflict in Texas history. What is less known is that Texans fought a second Battle of San Jacinto that was twice as exciting and nearly as bloody as the original.

The second Battle of San Jacinto took place half a world away from Texas and over sixty years after the original battle. In May 1898, the United States invaded the Spanish-controlled Philippine Islands as part of the Spanish-American War. Within a month, U.S. forces defeated most of the Spanish military on the islands. This success owed, in part, to the assistance of native Filipinos who 'd been fighting a war of independence against their Spanish colonial rulers since 1896. The Filipino revolutionaries provided the U.S. military with soldiers and operational intelligence under the belief that once victorious, the United States would leave the Philippines and allow the Filipinos their independence.

It didn 't happen. At the end of the Spanish American War, Spain ceded control of the Philippines to the United States. Instead of then granting Philippine independence, the United States took possession of the islands for themselves. Redirecting their efforts from the Spanish to the new occupiers, Filipino insurgents under Emilio Aguinaldo launched a guerilla war against the United States in 1899. Combat was brutal. Filipino insurgents attacked U.S. supply lines, killed American soldiers, and then faded into the countryside or the safety of friendly villages. Hoping to capture rebel leader Aguinaldo and end the war, the U.S. army responded to guerilla attacks by committing brutal atrocities on those who helped the revolutionaries, leaving burned villages, and mutilated bodies in their wake.

The Second Battle of San Jacinto took place amidst this chaos and would be fought between Aguinaldo 's insurgents and the Thirty-Third Texas Infantry Regiment out of San Antonio. The men of the Thirty-Third were an eclectic mix. Some had fought in Cuba in the Spanish American War. Captain Lee Hall had been a Texas Ranger and others in the Thirty-Third could trace their military roots to the Indian battles of the Old West. If any animosity existed between these men and Native Americans, they seem to have left it in the past, as at least one Indian, a Choctaw, was a member of the Thirty-Third. John A. Logan, the son of U.S. general and 1884 Republican Vice Presidential candidate John Logan, was also in the regiment. 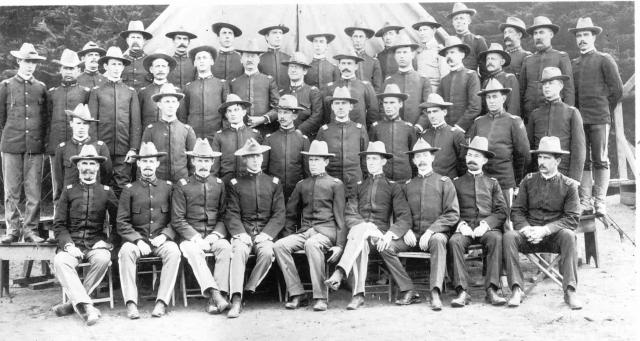 The Thirty-Third arrived in the Philippines on October 29, 1899, where they were immediately tasked with pursuing Aguinaldo 's insurgent army in the interior. On November 7, the Thirty-Third saw their first combat, but the engagement was short-lived and the enemy forces poorly trained. Shortly thereafter, however, intelligence arrived that some 3,600 men of Aguinaldo 's personal army had walled up outside the nearby village of San Jacinto.

The Battle of San Jacinto took place on November 11, 1899. At 8:30 am that day, the men of the Thirty-Third entered a beautiful valley of rice patties surrounding San Jacinto and found that insurgents had flooded the rice field, leaving the Americans to trudge through waste-high mud. Colonel Luther 'Old Rabbit ' Hare dispatched an advanced guard of the Thirty-Third to slog ahead of the rest of the regiment to scout enemy positions. When the scouts came under fire from an insurgent outpost, the rest of the Thirty-Third rushed to cover 1.5 miles to aid their brethren. The run was exhausting. Over the next forty minutes, the heat and difficulty of running in mud saw many Americans collapse face first into the waste high water. Those who could run kept running, stopping only to pick off Filipino snipers. When the men reached their besieged comrades, they flanked the insurgent nest and forced them to fall back toward San Jacinto and the rest of the revolutionary army, which had sequestered themselves in a series of trenches in a dense coconut grove.

As the Thirty-Third advanced toward the enemy, bullets whizzed past their ears 'Filipino snipers had positioned themselves in coconut trees, using the dense foliage as camouflage. Perhaps hoping to earn the same accolades that had made his father a general, Major Logan headed to the front lines to coordinate the assault on the coconut grove. A sniper bullet ended his military career and his life. Seeing this, the remainder of the Thirty-Third then took up elevated positions and used their superior weapons to pick off the tree-bound snipers (An unconfirmed rumor said that the men of the Thirty-Third were actually the ones to kill Logan because the major had thrown the regiment’s dog overboard on the way to the Philippines).

With the snipers gone, the Thirty-Third rushed the trenches under heavy gunfire and used bayonets to dispatch defenders. Although most of the enemy ran, a black deserter from an American infantry regiment who 'd joined the insurgents and risen to the rank of captain shot one Thirty-Third officer before he was himself shot and killed. Many insurgents fleeing the field met their end as well. Company B of the Thirty-Third had dragged a Gatling gun through a nearby river, taken San Jacinto 's square, and turned the machine gun to fire on escaping revolutionaries. Insurgents fell, surrendered, or escaped to the safety of the jungle. San Jacinto and the surrounding area were now under American control. Texans had won a second Battle of San Jacinto.

Like its namesake, Texans won the battle with a courageous charge that inflicted heavy casualties at the loss of few men on the Texas side. Official reports say 81 insurgents died in this Battle of San Jacinto, but the men of the Thirty-Third put the number closer to 300, with at least 200 more wounded. The Thirty-Third lost only seven men. When a general congratulated Colonel Hare on his men 's willingness to rush into danger, the officer replied, 'should I go to hell, my men would answer to their names at roll call next morning with me. ' According to rumor, even Aguinaldo recognized the Thirty-Third 's tenacity, telling his men to stay away from the Thirty-Third because 'They will murder you all if you stand and fight. '

The men of the Thirty-Third fought many more battles in the Philippine-American War, killing two insurgent generals and capturing Aguinaldo 's Secretary of State, mother, wife, and child. Although they would not be among the U.S. forces who eventually found Aguinaldo, their efforts contributed to his capture in 1901, which led to the end of the Philippine-American War. There lies the major difference between the two Battles of San Jacinto. Texans fought the first as underdogs hoping to achieve independence from what they saw as a despotic colonial master. In the second, Texans were the colonial masters. They fought to suppress independence.

Thanks to Jack Andersen for telling me about this story.